HOW TO MAKE SPAM SLAP, WITH JUNZI’S LUCAS SIN

Plus: How to Scramble Eggs Hong Kong Style and Why Ketchup Belongs in Your Fried Rice 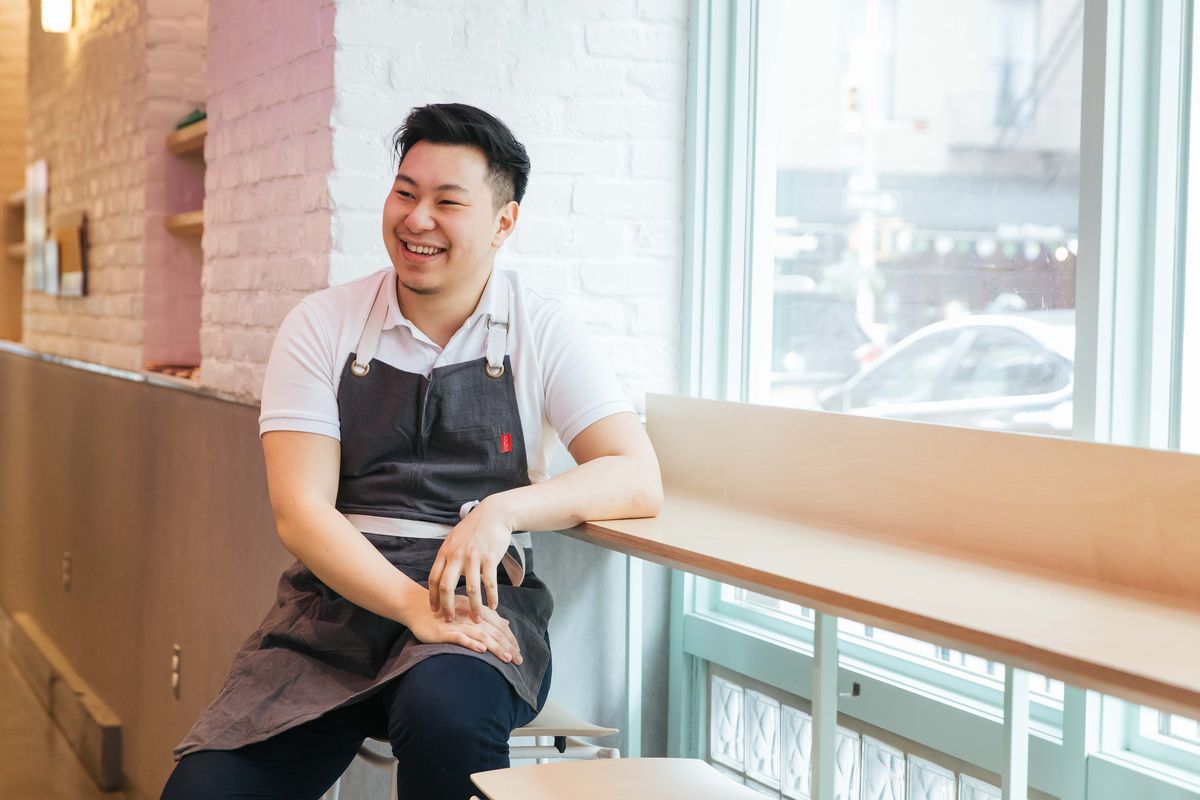 The Game is supposed to be the best day of the year for Harvard and Yale students—replete with football, pranks, and alumni ready to brag about having snorted blow with Dubbya.

Unfortunately, I wasn’t exactly welcome at The Game. And for good reason: As a sophomore, I wrote a pedantic polemic called “Shut Down Harvard Football,” because of the whole concussions thing. Yes, I was a grinch in college.

But I was also a hypocrite. So during my junior year, I drove down to New Haven for The Game anyway—telling myself it was fine as long as I left before the start of the second half.

Which brings me, belatedly, to the reason I’m telling you this story: During the fourth quarter of The Game, while most of my friends were cheering on The Crimson, I snuck over to Junzi for the first time, abandoning fumbles and first-downs in favor of bowls and bings.

I can’t remember what I ordered for lunch that day, but I know it was good enough that I came back to Junzi late that night—and ate a scallion pancake stuffed with a runny egg, pickled daikon, and red-cooked pork belly. In a mildly inebriated state, I told my buddies that whoever came up with the idea for Junzi was a genius. Turns out, I might have been right.

Lucas Sin opened his first restaurant at 16 years-old in an abandoned Hong Kong newspaper factory. In college, he ran restaurants out of his dorm room at Yale. And now, at 26-years-old, he’s brought Junzi to New York—offering fast casual noodles, rice bowls, and chun bings by day and takes on fried chicken, juice box cocktails, and dumplings After Hours.

As COVID-19 has disrupted restaurant service across the country, Junzi has started delivering family meals—so you can buy their noodles, rice, sauces, and meats in large quantities for your home.

On Instagram, Lucas has been posting creative ways to cook with Junzi’s ingredients if you do order them. But he’s also been dropping knowledge that’s valuable even if you have nothing in your pantry except for boxes of Spam. (Follow him @lucas.sin.)

So I called him up and asked him for his best tips on what to cook when you’re stuck at home—and he delivered.

Here’s what we covered:

*Why Spam is so special

*How to make Spam fried rice

*Should you serve the eggs with Spam?

Why Spam is So Special

Lucas: On top of being convenient, a lot of canned goods and dried goods provide a sense of comfort and evoke childhood memories. Spam, for example, is an integral part of a lot of my childhood food memories as a kid who grew up in Hong Kong.

The cool thing about Spam is it’s an American product, almost as American as it can get, but it was dropped all over the world during wars. So Spam is a huge part of Korean cuisine; it’s really important to Chinese cooking; it’s huge in Filipino cooking. And basically every single culture has taken Spam and found a way to integrate it into their version of an Asian-Western fusion cuisine.

Spam in Hong Kong is often eaten in these restaurants called cha chaan teng, which are basically Hong Kong style diners. During the British occupation, the good people of Hong Kong didn’t have access to the same kind of luxury goods that Brits or Europeans had, but they still wanted to aspire toward that lifestyle. So instead of using tomatoes, they’d use ketchup. Instead of using fancy meats, they’d use Spam.

So Spam is often sliced, and then seared off to get it nice and crispy, to activate the aromatics, and it’s served with eggs or rice or macaroni or over Campbell's Cream of Chicken soup.

How to make Spam fried rice

Lucas: So the Spam video I posted used leftover millet rice, which we normally serve with firecracker chicken at Junzi.

Editor’s Note: Lucas posted a full video tutorial for how to make his Spam fried rice in an Instagram Story he’s saved to his page, titled “Spam.” Check it out.

Lucas: Ketchup is really important to Cantonese comfort cooking, too. Because, as I said, it was a stand-in for fresh tomatoes and tomato sauce, so ketchup has a lot of uses. Ketchup fried rice is a wonderful, wonderful thing.

Almost antithetical to what I just told you, while a lot of people say rice should be dry, or the purpose of fried rice is to get the rice as dry as possible, ketchup fried rice is an instance where the finished product can be a little bit wet and the grains are kind of gelled together with the sauce.

Ketchup fried rice is pretty popular in Japan as well as Hong Kong. So let’s say you’re making a regular fried rice—just at the end, after all your ingredients are in there and well-cooked, just give it a tablespoon or two of ketchup and that gives it a sweet tomato flavor, and it’s really delicious.

Ketchup is good in there. Maple syrup is actually really delicious in fried rice. Mustard fried rice is also great.

You cook it the way you’d cook any fried rice. You just finish it with whatever your condiment is, and it usually comes out pretty nice. Because if your pan is hot enough, it will caramelize the sugars inside of the sauce, so you get this cool, sort of like deeper almost sweet and savory flavor.

Lucas: Every culture has their way of scrambling eggs. I just think Hong Kong people make it best. If you watch any fancy Western or French or British chef make scrambled eggs, the whole purpose is super low heat, basically as small as possible, so you get these small, fluffy curds.

Hong Kong style eggs are totally different. What you’re hoping for is not curds so much, but layers: Really thin, perfectly cooked eggs with a little bit of the runny yolk in between these layers.

So the technique is you add a little bit of milk, a little bit of oil into the eggs as you’re mixing up the yolk and the white, and in the really hot pan, you pour those eggs in, and then with a spatula, you basically want to push the eggs until you form these really thin layers. And you want to constantly be tilting the pan so the layers are as thin as possible. Every time you push, you tilt the pan so that the raw egg fills in the gap of where the cooked egg was, so you keep making these layers and layers and layers.

Depending on the translation, the technique is either a “silky egg” or a “slippery egg,” but it’s kind of a staple of Hong Kong style diners. It should take about ten seconds total by the time your eggs hit the pan.

The pan isn’t quite smoking, because you don’t want your eggs to burn, but it’s very hot. Just short of smoking. No more than 10 seconds. Tilt, push. Tilt, push, Tilt, push. By the time you put your eggs in the pan, you basically lift the pan off the heat and just use the remaining heat inside the pan to get it cooking. MY FRIENDS+FAMILY IN THE INDUSTRY: BE KIND TO YOURSELF. THIS IS ONE OF THOSE “IN CASE OF EMERGENCY, PUT ON YOUR OWN OXYGEN MASK FIRST BEFORE ASSISTING OTHERS” TYPE OF SITUATIONS. ⁣
⁣
AND HONG KONG STYLE SCRAMBLED EGGS ARE MY OXYGEN MASK. ⁣
⁣
I KNOW AUSTRALIA DAIRY COMPANY ⁣澳洲牛奶 IN HONG KONG WILL ALWAYS MAKE IT BETTER THAN ANY OF US EVER WILL, BUT HERE IS (ROUGHLY) THE RECIPE THE GUYS SLIPPED ME.
March 21, 2020

Should you serve the eggs with spam?

Spam is the best because it’s super salty so it balances out the egg. Ham, sausage, whatever you have is good. I mostly just like having it over toast.

Friend of The Newsletter, Iron Chef Alex Guarnaschelli, is raising money for her employees, who live paycheck to paycheck, but are now out of work. People like Alvaro, who braises tomatoes for Cavatappi pasta; Nancy, who chops vegetables; Kevin, who bakes beignets; and Gabriel, who washes the dishes.

Alex is matching up to $40,000 in contributions—so join me in donating now and put double the money in the pockets of her employees. Here’s the link.

Food safety in the time of Corona

J. Kenji López-Alt, who I write about so much you’d think he is involved in this newsletter—even though, in reality, I just really want him to do an interview with me—published a comprehensive guide on how to safely buy, cook, and order food in the time of Corona.

Like everything Kenji does, it’s great; and it’s based in science. So if you’ve been wondering whether you are likely to contract COVID-19 from ordering in food (no) or whether Chinese food is more dangerous than any other type of food (definitely not), check this out.

More bread from my friends

This brioche, baked by Hannah Byrd, is breathtakingly beautiful.

Dare I say: This looks like the perfect base for a Spam, Hong Kong Scrambled Egg, and cheese sandwich.